Brrr. Shelters are cold. I didn’t realize the extent of how much body heat a tent keeps until we slept in the shelter. It was a fun place to experience, but I was too long for my short side of the bunk which made it very uncomfortable and therefore impossible to sleep. And it was very chilly–manageable with my new sleeping bag. Georges slept in his massive sleeping bag bundled up to its warmest capacity, making him look like an Egyptian sarcophagus with a tiny Georges nose and mouth. All night he rolled around his sarcophagus without arms or legs–he looked very silly. We both had to get up in the night to pee–I had to twice–which I’m sure was terribly disturbing to poor Eelco trying to sleep beneath us. The man had hiked three 50 kilometer days the last three days, and now he finally gets a chance to rest on a bunk, and G and I are tossing and turning and peeing all night. The positive side to how short relationships made on the trail are???

We were all up pretty early. Eelco said he slept fine, but I have to wonder if he was being kind. I slept nearly none–the second day in a row–there was just no way to be comfortable when my body is 6 inches longer than the box I put it in. Eelco left camp before us. The day’s goal was a village called Mercer. It was a long and hard forest track followed by many k along a river’s stop bank away from us, but it was our lofty goal. We knew the forest track was not only physically demanding, but also a trail without a trail. It was said there were some markers, but not always a path to walk on. When there was a path, there weren’t always markers.

G and I set out in the gray rainy weather and arrived at the fence that was the beginning of the track a little while later. The fence said the trail was closed. We did have a revision to our map for the section, but not from the beginning. Another sign detailed the track and its time. It forecast 4 hours by jungle or 4 hours by road. We checked our map and saw there was an alternative section that went partly through the forest but also took roads up further north and swung back down on the east side of the track. We also saw the cross roads we were standing on could get us to Mercer and skip the jungle altogether. I told G it had to be his decision and that I didn’t want anything to do with it. We discussed the coming rain and my ‘grumpiness in the jungle’. Ultimately, G picked to leave the trail altogether and take the cross road we were standing on to get to Mercer in a totally jungle-free way.

We set off down the gravel country road. It wasn’t a bad road at all. Just a few houses and farmland. We could see all the forested mountains around us; could look at where we had hiked the day before and where we weren’t hiking today from a peaceful distance. The vistas were pretty as we wound our way out of the hills and into the flat valley. We stopped to look at trees and distant peaks and animals. We took pictures and blew bubbles with our bubble gum. It was a very nice morning. (Even if the sun still refused to come out)

The ridge we didn’t hike

Eventually we had left all the interesting stuff and we’re now looking at a long, long, flat stretch of straight road. 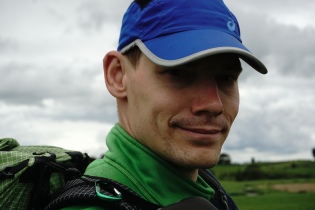 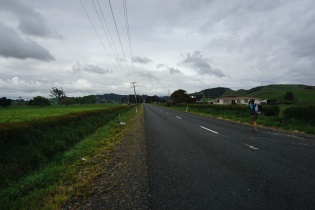 We stuck out our thumbs and got a ride to the state highway–where we would be on the prescribed trail again. Meeting up with the trail, we found ourselves on a very dangerous stretch walking next to the state highway for a few kilometers until we would cut into the farmlands and follow the stop bank of the river all the way to Mercer. We walked carefully. The fields next to us were just laid with manure, so the air was thick with terrible smell and loud passing cars and trucks.

Thankfully, we made it to the small bridge that signaled we were to get off the road. We tramped into the grass and found a random sign with a map of the pending river section. Looked like we’d make it to Mercer in good time, having skipped the jungle misery. We curiously followed the orange markers over a fence and then through shoulder height wet grass to the bridge. Bent over, we walked under the bridge–the river running down the concrete slop next to us–and arrived at the tall wet grass on the other side. And as per the Te Araroa culture, the trail appeared to continue through this very tall grass next to (of course) an electric fence. G said he was jumping the fence and walking on the perfectly mowed grass on the flat, other side. So we carefully climbed over the fence and saw an orange marker at the top of a raised hill slightly behind us and further up the grass. Sometimes the trail doesn’t make a lick of sense.

We realized a stop bank is a long, man-made hill that goes along a river (presumably to the stop the water should it get too high?) Now we understood we wouldn’t have to walk in the gross grass by the electric fence, but would be walking in the raised path–sometimes high, wet grass; sometimes short.

The hours ticked by. It finally began to rain. Luckily, we had just finished the last high-grass section, so we were saved that much more wet. The view was pretty static–small river to the right, fields of cows to the left; flat until the far horizon. Though we had hoped to make it to Mercer before the rain, it wasn’t too bad finishing out the stop bank and getting on the road as the rain came. We sat under someone’s covered garage to have some lunch just after the stop bank. While we ate, the rain cleared up. We finished the kilometers over the road to Mercer. The last kilometer was supposed to cross under the state highway and travel through a drainage ditch. It was too wet in the ditch, so we just walked next to the highway.

Mercer turned out to be a village built around a large gas station/truck stop that had a few restaurants. We had made it, but it was really an easy day without the jungle section. Even still, I was completely exhausted. G and I thought it must be the two previous sleepless nights. We focused on small tasks, one at a time. Inside the gas station we took off our rain gear and washed up in the bathrooms. We had an ice cream cone for 70 cents and exhaustedly talked about where to sleep. We were happy to sleep in the tent but neither of us wanted to put the tent up in the rain. We had showered the morning before and both felt we didn’t need to spend any money to sleep somewhere tonight. But as we talked it rained harder and harder.

I called to investigate the price for beds at the local backpackers. He offered to pick us up and bring us back, but the prices were pretty high. In the end we decided to take the room. We had dinner, bacon burgers–not hamburgers with bacon, lots pieces of ham on a bun–and fries. When we called Jim from the backpackers, he said another chap had just phoned and he was heading down to pick all three of us up in a few minutes. It must be Eelco! We looked around the building and finally found him enjoying a muffin and a smoothie.

We all swapped stories from the day. Eelco reported the forest track was as bad as we all had feared–he said there were parts where he was just swimming through the jungle looking for the next marker. Because it took him longer than us, he had been rained on a lot more than we had; and he had had rain through the tall grasses of the stop bank, so he was very wet.

We all piled into Jim’s car and headed out to the backpackers. The views from the car were good–rolling hills and steep pastures. Still no sun, but rain matters less from behind a car window. Once we all paid and checked in, Jim showed us to our rooms. It was an odd little place, but clean enough. We all showered and dinnered. I was exhausted and went to bed early, so we didn’t hang out with Eelco this evening. Just too tired. 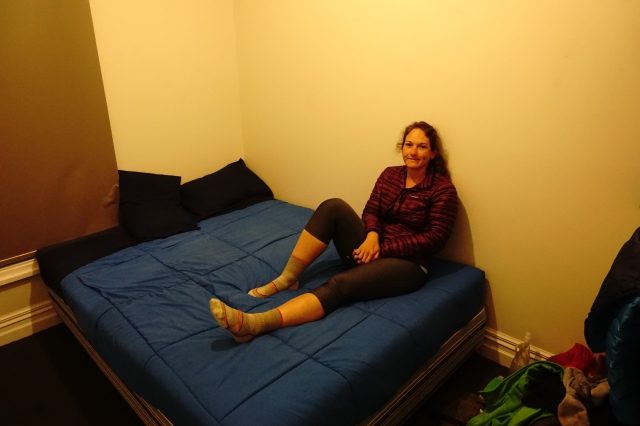